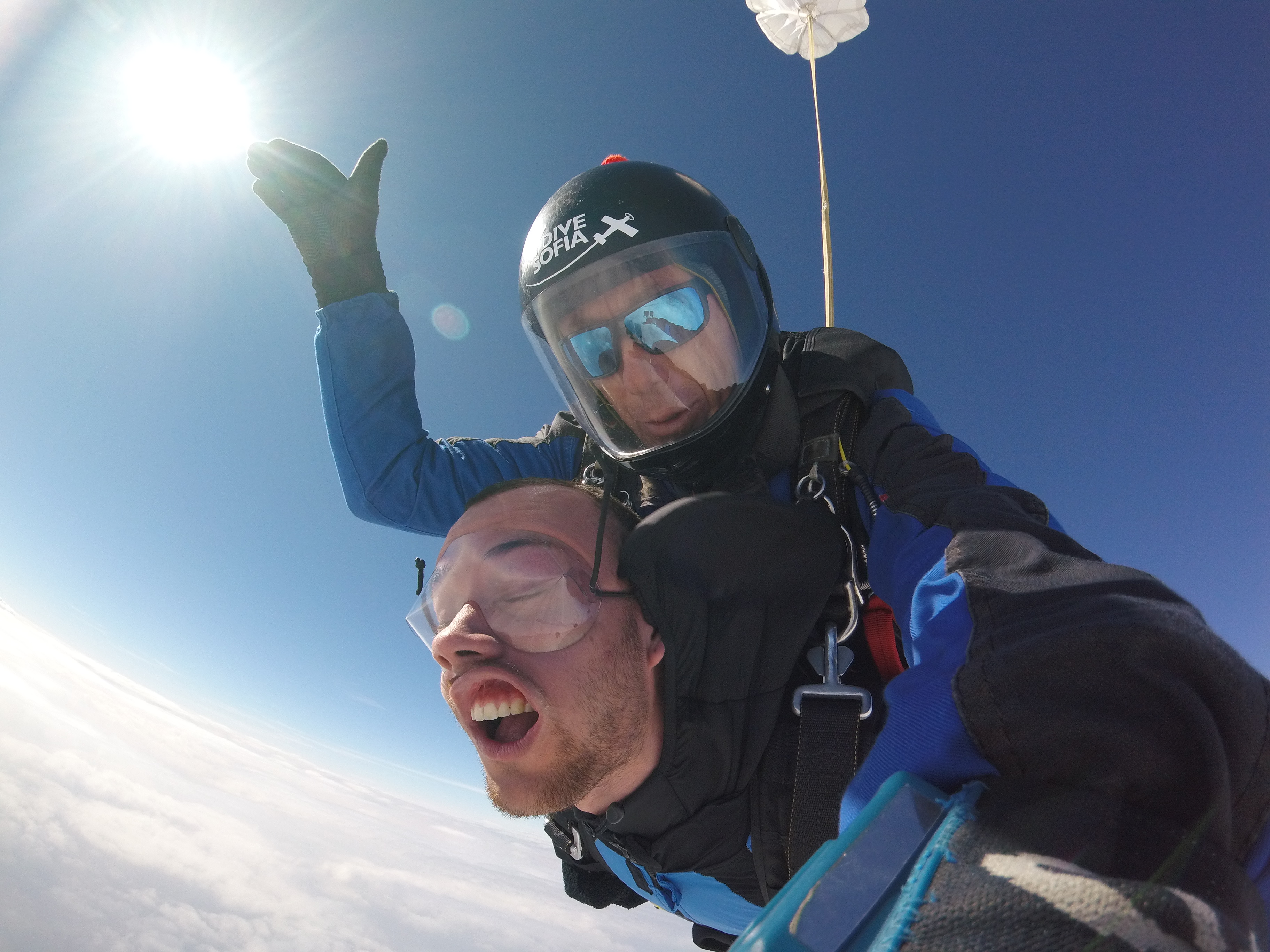 Great Dane, out of the ordinary frame. Yeppa!

Here is my diary for the first 2 weeks.

I was lucky enough to be with my friend, Nikolay, the first weekend. He showed me around Sofia before it closed down, and drove me to Blagoevgrad Sunday evening. We drove on poorly maintained roads and the weather was bad, which made the trip a little dangerous in a car with a defective windshield wiper.

We arrived late and ate dinner with my new flatmates. My flatmates are pretty nice. I live with two 22-year-old girls - one from Spain (Claudia) and one from Portugal (Daniela) - and I live with a French 19-year-old boy - Ange (Alonzo). I think we are going to have a lot of fun together.

I was introduced to the rest of the team and got to know the daily routine at the office. Afterward, we drank a few beers, smoked shisha, and listened to vinyl records. It was a decent first day. It’s insane that one day of living with these people is giving me so many cultural impressions. 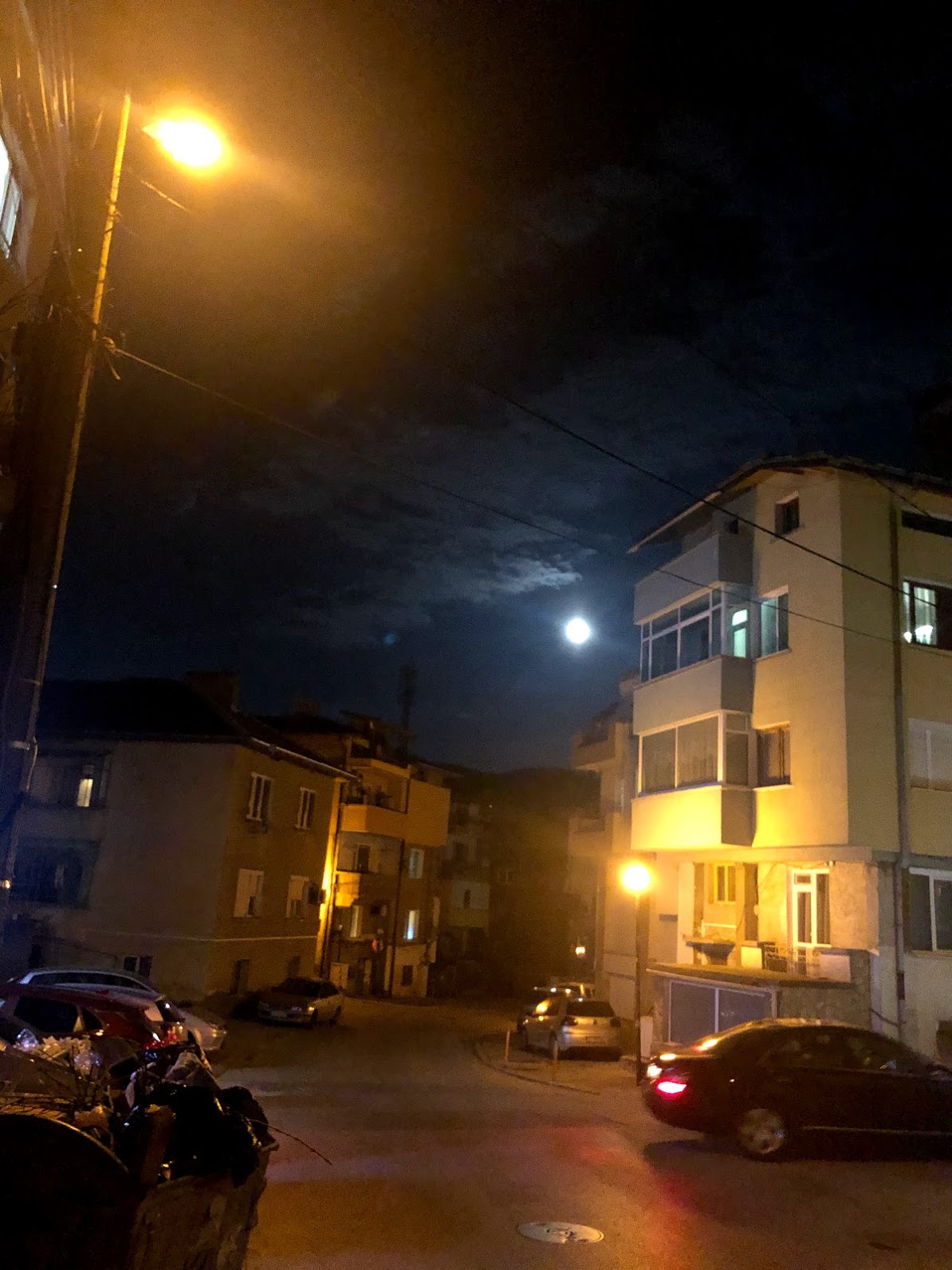 It’s a little hard to match the energy of the rest of the team, I don’t feel like I can feed off their energy yet. That makes me miss my friends in Denmark. It’s actually quite hard to be with foreigners all day. But I also like it, it’s like being at boarding school. There is probably nowhere I’d rather be right now. Except for my bed. I miss that one a lot. I can feel the springs in my mattress all the time.

After office, we introduced music to each other from our own countries. It’s very funny to live with people with South European energy. They danced/twerked in the kitchen, while I was eating snacks on the couch.

the environment at the office is starting to become pretty cool. We made a collaborative playlist with songs from each of our home countries. It brings a super nice vibe to the office. At my first event, there were so many participants. Way more than I had anticipated. I think we were about 15-20 people. After the event, all of us (the volunteers and a French teacher named Mathis) went to the other apartment. We smoked shisha and ate pizza. 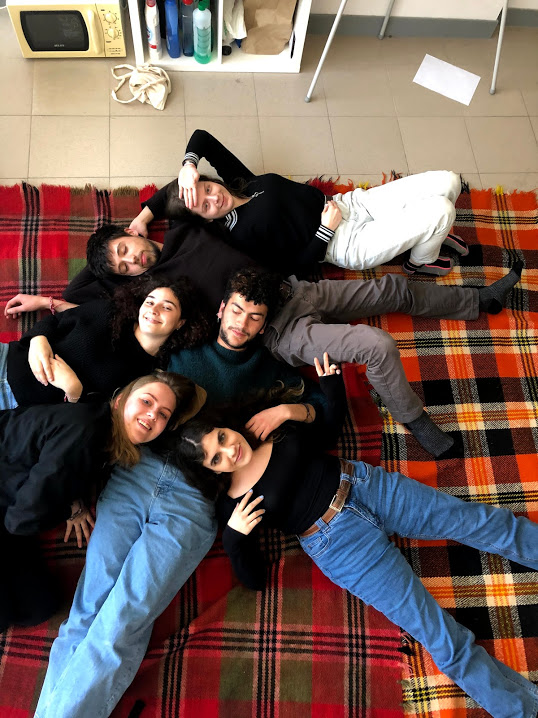 After the office, we went back to the apartment to do the GAMIFY zoom meeting. We tried to make the best of the event, even though we wanted to be free of this event. Afterward, all of us went to an abandoned building at the top of the hill, behind our apartment. This building is well away from any street lights, and it is basically only the frame/skeleton of the house.  We went on top, listened to music, danced, looked at the stars/moon - we saw 2 shooting stars.

The whole team and I ate pancakes with my mentors. My mentors showed me around the city. We went to their campus, the 2 squares of Blagoevgrad, the park, and back to the cantina of the campus where we ate lunch together. Also, they showed me the old part of the city. We walked a lot, at least 20.000 steps. I was so tired afterward.

Apparently, it is an architectural trait of Bulgaria to make the houses narrower at the bottom at wider at the top. This way the house leaves the smallest footprint that they have to pay for, but they still hustle some extra square meters at the upper floors. No surprise. Bulgarians are born hustlers. You can see it in every public space. Everything ever builds in Bulgaria is built in the poorest possible quality, that they can get away with, and they don’t maintain anything. AT ALL. See for example buildings, roads, dams and anything else actually.

Afterward, they drove me back. I fell asleep in Gonzalo’s bed while they were in the double bed all of them. They did the sweetest thing. All of them left to go into the living room, they turned off the lights and gave me a blanket. After a while, they woke me up, because Kiril and Ivan had ordered us 2 huge pizzas.

Nikolay send me a text at 22.00. “Bro. Skydive is open tomorrow”. I was fired up. We had already been drinking mimosa - shout out to Claudia for making me my first one.  I was blowing up his phone but he didn’t answer. I didn’t care, I was going to be on his doorstep in the morning. WE WERE GOING TO JUMP OUT A PLANE!!

I had a ride. It was a stressful morning. I woke up my flatmates, so they could order me a taxi to the pickup point. My mentors brought me a traditional Bulgarian breakfast and we were on our way to Sofia.

Being a tourist in Sofia yet again.

Being inside a big church while they were having a religious ceremony, and I was just walking around with my hat on and squeezing sneakers like a clueless tourist. The priest obviously told me to take off my hat. The energy in there was a little extreme by danish standards, almost like a lot of them were hypnotized.

I got picked up by Nikolay in Sofia near the church. We drove to the airport and we hyped up each other up. When we arrived at the airport, I had to take a dump in a trailer restroom in fear of shitting myself in the sky. When I came back, I was introduced to Nikolay’s rugby friend, Stefan, and his girlfriend, Anika. Great people.

We were petting some sweet street dogs at the airport. The plane was visible from the parking lot, and it was one of the smallest planes in existence. The airport was basically a trailer park with these dirty (but sweet) street dogs walking around. 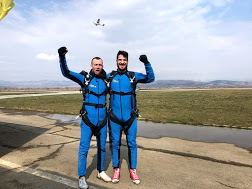 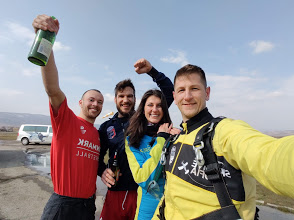 I was actually way less scared than I could’ve imagined. There were a few scary checkpoints: When the engine started, lift-off when the engine gets turned off, when the lid opens 4.200 meters in the air and when the first person jumps out and disappears into the sky in a second. That was nerve-wracking.

was tightly packed in this mini airplane. Scary shit, I’m telling you that. It was our

turn. The wind up there is incredibly strong and loud. We jumped out of the plane and did a flip. Then we fell for a minute. I tried to scream from the bottom of my lungs, but it was impossible to hear my own voice. This is the biggest adrenalin rush in my life so far. I literally look like I passed out on the go-pro footage. When the pursuit deployed I felt insane amazing. It was hard to grasp. I looked directly down, but I wasn’t afraid. Now I felt 10 feet tall. We did some maneuvers; spiraling, diving, and stuff. While flying I could see the other guys flying not so far away. We landed very smoothly and jumped around like small kids to celebrate. 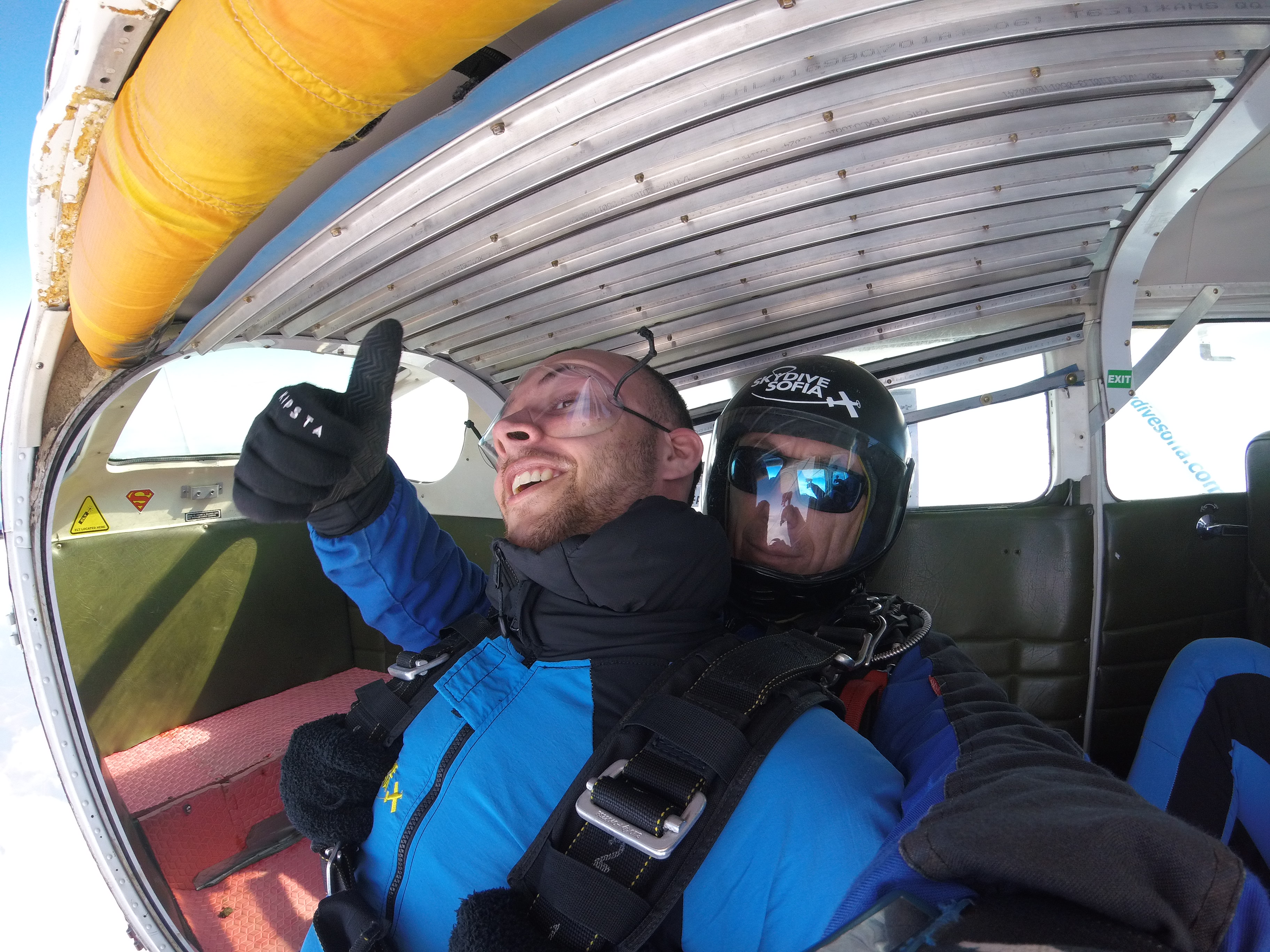 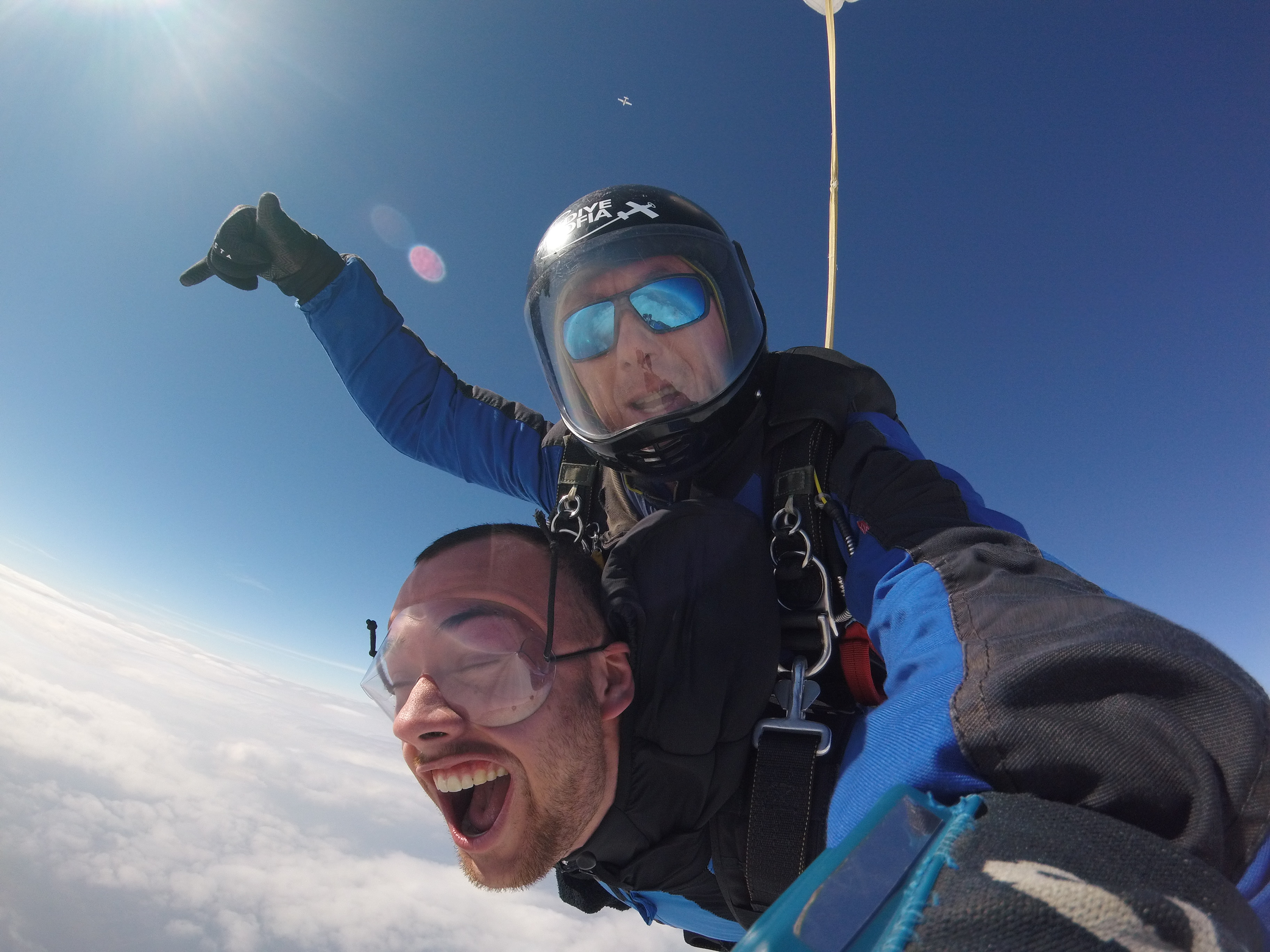 We drank beers in the sun with the skydiving instructors, pilot, and secretary. We were talking for a while, enjoying our euphoria before we drove off. We started driving fast and the light unit over the dashboard just fell. We were also drifting and making donuts at the airport runway. Crazy stuff. On the way back to Sofia we stopped at a Serbian street food place by the highway. We ate on the back of the car together with Stefan and Annika, and I ate some of my plastic forks by accident. Right beside the food-place, there was a lama farm with guard-dogs.

I managed to catch the bus, even though the driver had a hard time understanding English. My phone was dead, so I had 1,5 hours with my own thoughts. After skydiving, I felt more peaceful than ever. Incredible feeling. The world would be a better place if the world skydived once a month. Trust me on this one. When I arrived in Blagoevgrad, I took a taxi back home, without knowing the address. The taxi driver didn’t speak English and I didn’t have juice on my phone. Mr. worldwide right here.

Insane lunch break energy at the office. Dance-floor in the middle. Aziz, Claudia, and Daniela are dancing a lot. They are so silly with it. It’s just perfect. They are destroying it (in a good way) on an early Monday afternoon. They are literally twerking and everything. After the office, I talked to my friends and family from Denmark. Later on, I chilled with Claudia and Aziz after they came home. 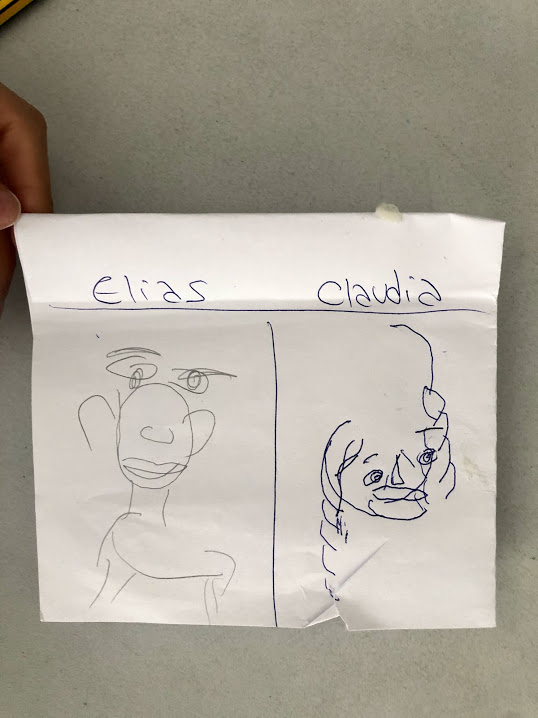 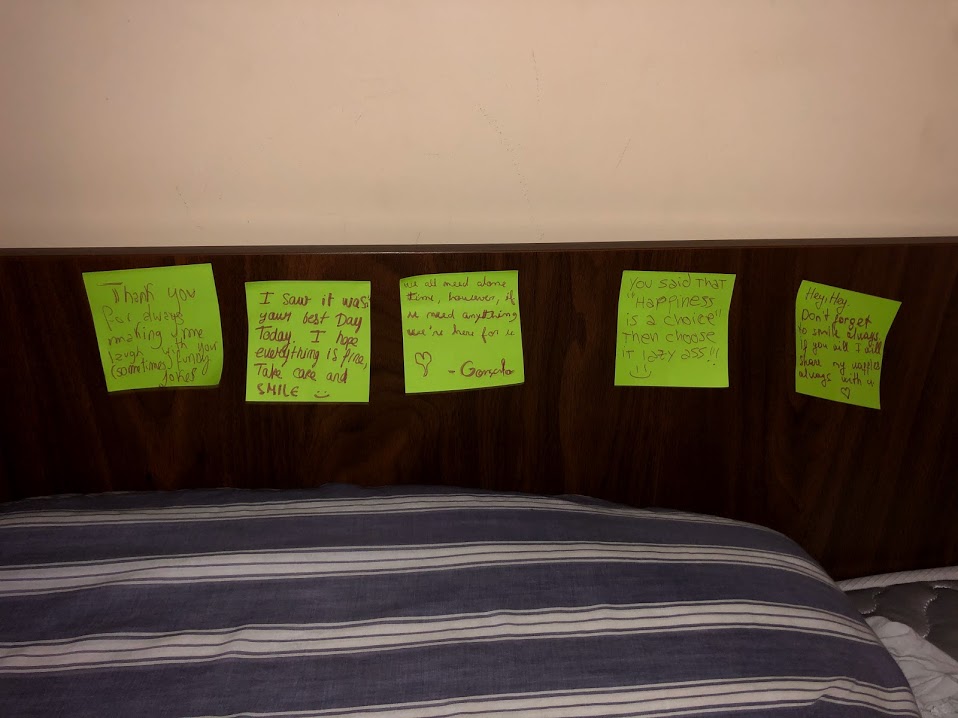 The rest of the week was pretty chill. I climbed a mountain to reach the cross, while I took a break from the others. 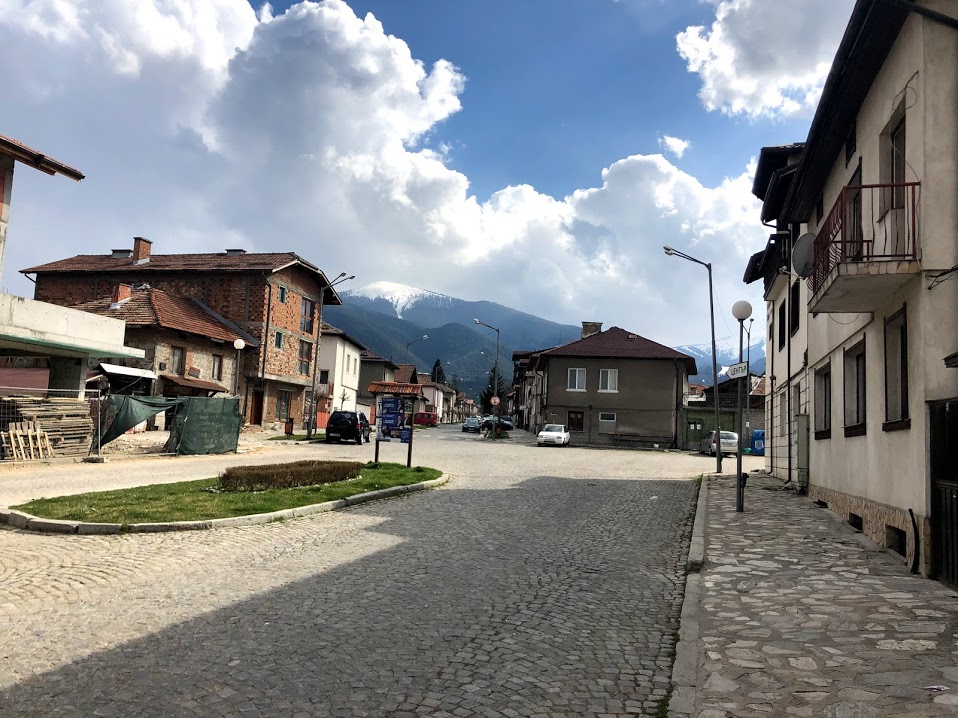 For the weekend I went skiing in Bansko with 3 others. We were the only people at the hotel. The jacuzzi didn’t work, but the steambath did. It was a lot of fun all in all.

I have already had an amazing time, together with amazing people!

This article is created by Elias Torjani -  a participant in the "ESC: European Skills and Competencies" project, co-funded by the Bulgarian National Agency of Erasmus+ Program Human Resource Development Center.